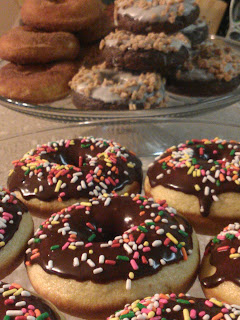 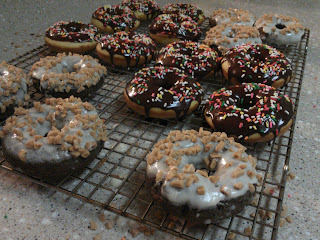 This weekend was my son's 13th Birthday Party.  Every year I get excited wondering what my kids will want for dessert on their birthdays.  I start thinking about unique cakes I can make, or even cupcakes.  I can pull the fondant out or get out my piping bags and tips and make some cool characters.  But alas, it is never to be so.  My youngest does NOT like cake.  I have to beg him to try the cupcakes I make for my blog.  No, he is not a lover of cake and so, he requested donuts for his dessert!

I'm all for making life easy, so I used the same recipe base for all three donuts. 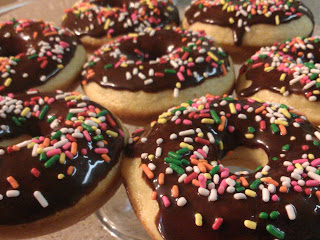 I got up at 6am on a Saturday morning for that silly boy, the things we do for our kids!  My vanilla with chocolate glaze turned our perfect, probably even better than the first time.  We added sprinkles to make them look more like "Birthday" donuts! 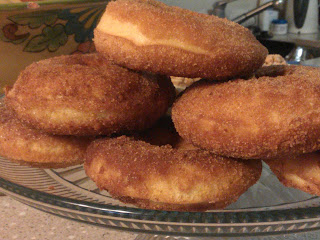 To make the cinnamon sugar donuts, I used the same vanilla donut recipe.  When the donuts are done baking and are still warm, I dipped them in melted butter and then tossed them into a cinnamon sugar mixture.  So easy, you don't even need a recipe!  Just melt a half a stick of butter for a batch of donuts and mix 1/2 cup of sugar with 1 teaspoon of cinnamon for the topping.  Then place on your rack to cool! 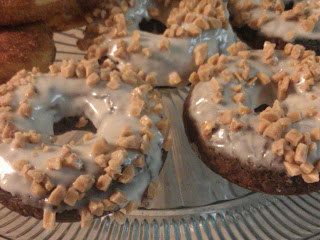 The chocolate donuts were also the same recipe but with 1/4 cup of cocoa mixed into the dry flour mixture.  I then glazed the donuts with vanilla glaze made from 1 cup of powdered sugar, 3 tablespoons of milk and 1 teaspoon of vanilla.  You can sprinkle anything you like on top, I chose toffee bits (because I'm an addict)! 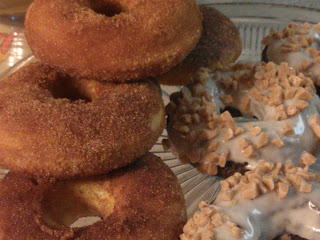 All of the donuts were yummy!  The favorite for everyone was the cinnamon sugar donut.  I mean....the kids were fighting over them!  Next time, I make an extra batch of these!!!  The butter kept the donuts super moist and the cinnamon sugar made them taste FABULOUS!!  The chocolate donut was yummy but denser and less moist.  Next time I will try taking out some of the flour and adding more buttermilk. 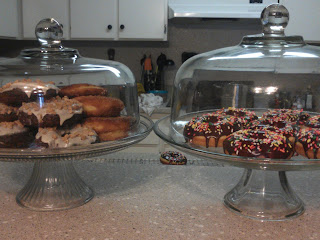 The house smelled and looked like a bakery!  There was flour everywhere but the end result was beautiful donuts and a VERY happy Birthday Boy! 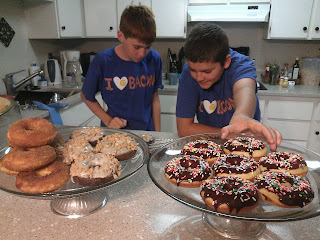