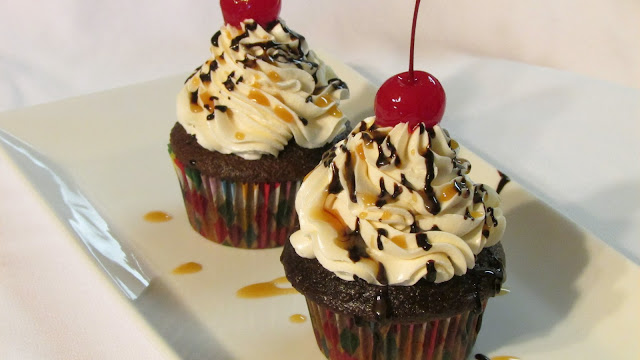 Monday night the boys and I headed over to Fenton's Creamery.  Fenton's has been in Oakland for over 100 years and has the best ice cream sundaes around!  I have been visiting since I was a little girl and continued all through college and now I take my kids there.  Both of my boys were born in a hospital down the street from the creamery and my only request after each of their births was for an ice cream sundae, which my Mom hand delivered to the recovery room (snuck those suckers right past the nurse's station!) 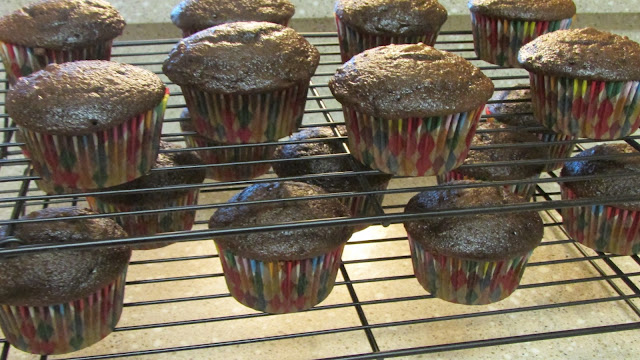 They have all of these crazy sundaes with wild mixtures of flavors and fun names, but for me it's all about a single scoop hot fudge sundae.  I don't need anything super fancy, just really good ice cream and LOTS of hot fudge and of course, the cherry on top! 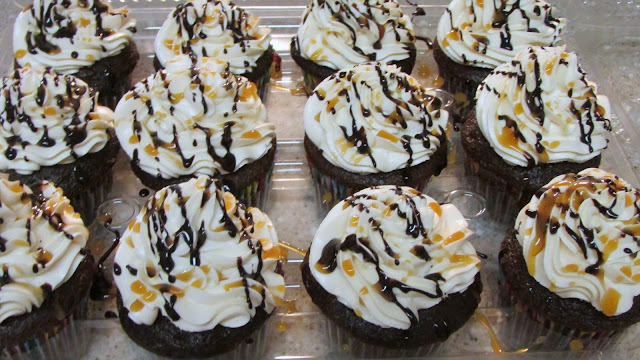 I came home Monday and couldn't stop thinking about how much fun it would be to make a cupcake that looked like a sundae.  I could make a fudgy cupcake to resemble the scoop of chocolate ice cream; the vanilla swiss meringue buttercream (big shocker) would look like whipped cream but taste more like a scoop of homemade vanilla ice cream; drizzle homemade (or store bought) caramel sauce and homemade (or store bought) fudge sauce over the top and add a cherry!  VOILA....Ice Cream Sundae Cupcakes! 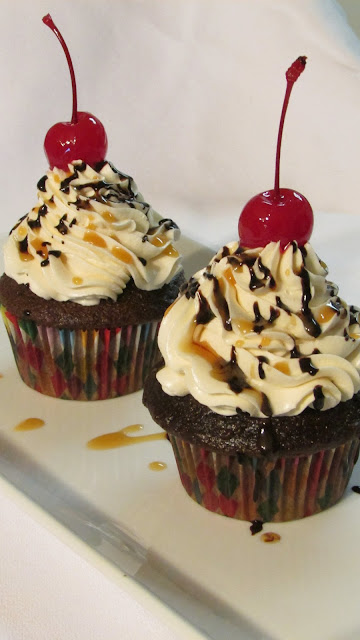 I think these are the very epitome of a celebration cupcake, they just look so fun and festive!  Um...they are also irresistible, the boys and I actually ate them  before dinner!  What?!  There's nothing wrong with that!  Cupcakes make fabulous appetizers!  Really....trust me....I'm starting a trend! 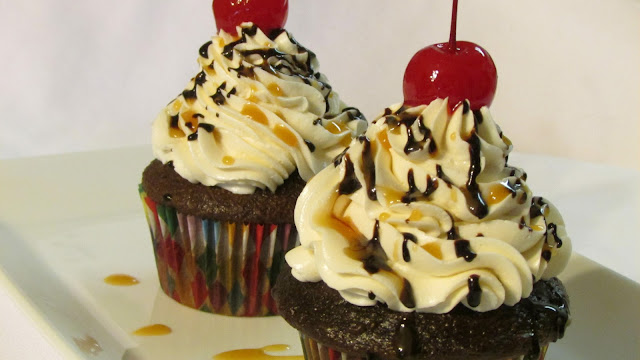 Just look at how cute they turned out!  Don't you want to make some??

The Cupcake:  via Barefoot Contessa At Home

In the bowl of an electric mixer fitted with a paddle attachment, cream the butter and 2 sugars on high speed until light and fluffy, approximately 5 minutes. Lower the speed to medium, add the eggs 1 at a time, then add the vanilla and mix well. In a separate bowl, whisk together the buttermilk, sour cream, and coffee. In another bowl, sift together the flour, cocoa, baking soda, and salt. On low speed, add the buttermilk mixture and the flour mixture alternately in thirds to the mixer bowl, beginning with the buttermilk mixture and ending with the flour mixture. Mix only until blended. Fold the batter with a rubber spatula to be sure it's completely blended.

Divide the batter among the cupcake pans and bake in the middle of the oven for approx 18 minutes, until a toothpick comes out clean. Cool for 10 minutes, remove from the pans, and allow to cool completely before frosting.

Combine egg whites and sugar in a bowl placed over simmering water. Bring mixture to 150 degrees F while whisking constantly.

Transfer mixture to stand mixer bowl, fitted with a whisk attachment and beat on medium speed until mixture cools and doubles in volume, forming stiff peaks.

Add butter in one piece at a time, mixing to incorporate.. The mixture may appear clumpy and almost curdled looking-this is normal. Keep mixing (may take a few minutes on high) and it will become even and smooth again. Add salt and vanilla and mix to combine.

Frost cooled cupcakes to look like whipped cream.  Drizzle hot fudge sauce and caramel sauce  over the buttercream and top with a cherry!  Feel free to use store bought sauces or make homemade.  Keep it simple!  :) 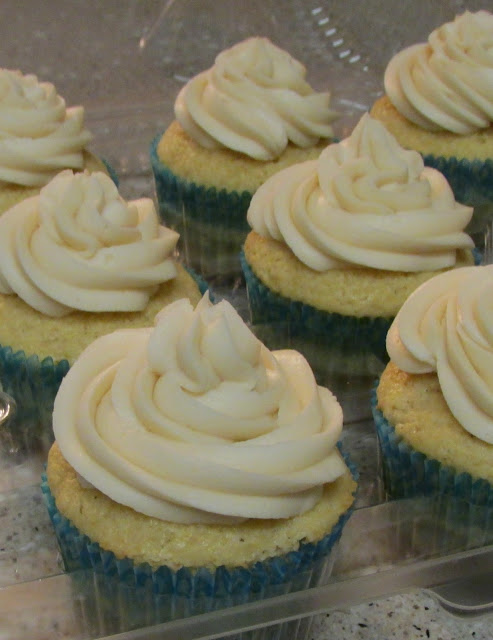 I'm still on the look-out for the perfect vanilla cupcake!  I actually don't have a problem with cakes made from a box.  I often doctor up box mixes to make cakes and cupcakes.  But I LOVE the taste of homemade cakes, especially when you can taste all of that fresh vanilla bean or whatever REAL ingredients you put in there.  The only problem I really have is that homemade cakes are rarely as moist as those made from a box and I am determined to find the perfect recipe. 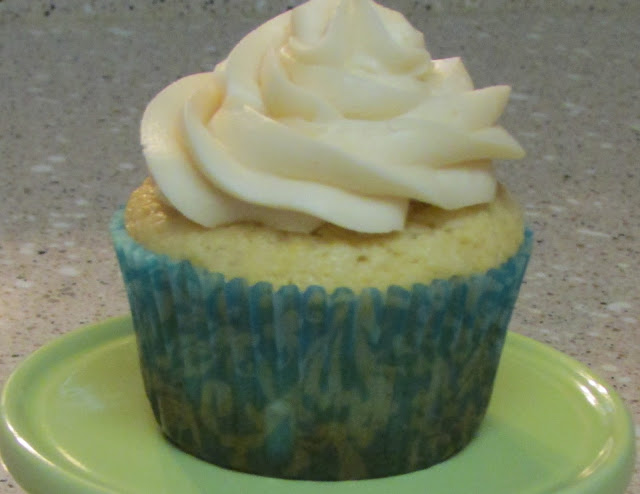 I do really love my vanilla bean cupcakes but I'm still looking for the perfect recipe!  I thought I'd give Brown Eyed Baker's recipe a try.  Michelle makes some fabulous baked goods and I trust her to have a great recipe!  This one did not disappoint!  Very moist cupcake,  tight crumb but not too dense.  I was a little concerned with all of the egg yolks, but it was still fairly fluffy.  I added vanilla bean seeds as well as vanilla extract, I love to see those little seeds when I eat a cupcake. 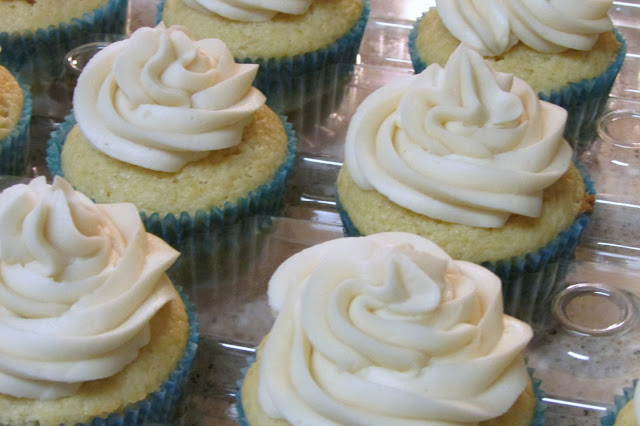 Now for the shocker.....I did not make Swiss Meringue Buttercream!  (gasp!)  I know....I am getting a bit of a reputation as an addict, but I started my 12 step program and step 5 is "try another frosting".  So I did!  I actually just made a very simple vanilla buttercream....with extra vanilla extract.  Hey...you are lucky there were no vanilla bean seeds in it, I really have a problem!  The frosting was delish...I thinned it out with a little  bit of cream so it was not too thick and it was perfect for the cupcake!  Ok...I will admit it....not EVERY cupcake needs to have Swiss Meringue.  There, I said it!  Now go make a batch of these yummy and very easy cupcakes! 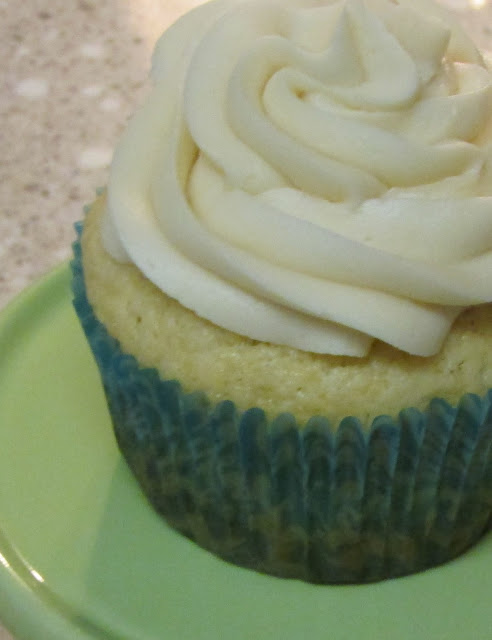 Hope you all have a great weekend!!

Whisk together flour, sugar, baking powder, and salt in bowl of standing mixer fitted with paddle attachment. Add butter, sour cream, egg and egg yolks, and vanilla and vanilla seeds; beat at medium speed until smooth and satiny, about 30 seconds. Scrape down sides of bowl with rubber spatula and mix by hand until smooth and no flour pockets remain.

Divide batter evenly among cups of prepared tin. Bake until cupcake tops are pale gold and toothpick inserted into center comes out clean, about 18 minutes. Remove the cupcakes from tin and transfer to wire rack; cool cupcakes to room temperature before frosting.

Using mixer, beat the butter on medium-high speed for 5 minutes, stopping to scrape the bowl once or twice.

Email ThisBlogThis!Share to TwitterShare to FacebookShare to Pinterest
Labels: Cupcakes 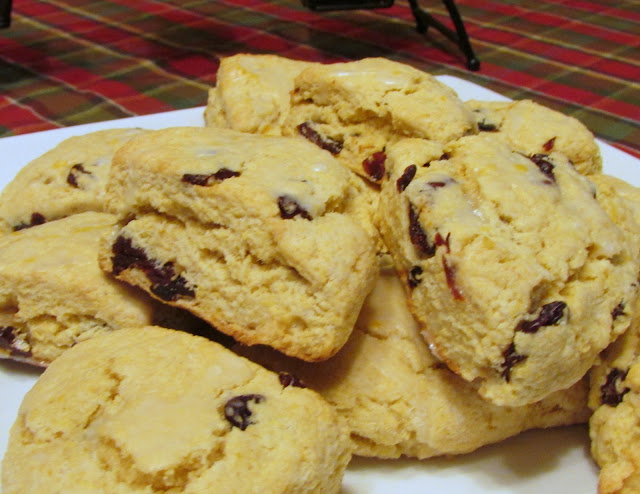 The boys and I decided to make the second week of winter break a week of gift card adventures.  We had gift cards for movie theaters, starbucks, restaurants, etc.  Believe it or not, you can plan entire days around your gift cards.  Soooo much fun!  On one of these days we went into San Francisco for the day and walked the park, visited an art museum, and drove around site seeing.  In the afternoon the boys were craving a treat from a bakery so I took them to a bakery I love, Arizmendi Bakery.  Arizmendi Bakery is a worker-owned cooperative specializing in morning pastries, artisan breads and gourmet pizza.  Lots of cool stuff!  I tried their Cornmeal Cherry Scone.....YUM! 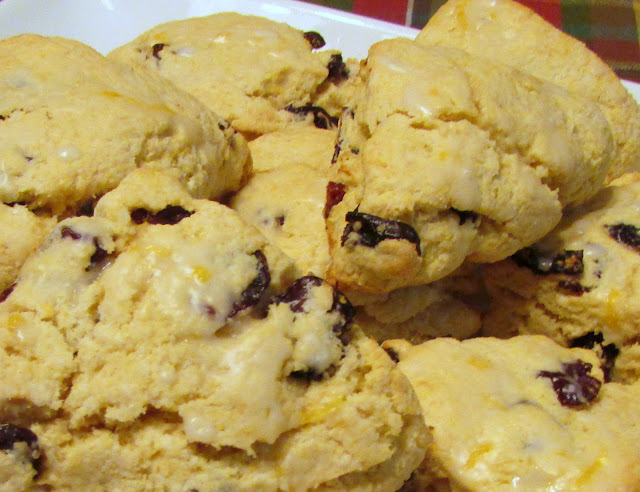 Had to recreate!  One of my favorite bakers is the author of a cookbook called "Bake!", Nick Malgieri.  His books are awesome but you can also visit his website.  On his site I found a recipe for Lemon Cornmeal Scones with Dried Cherries. 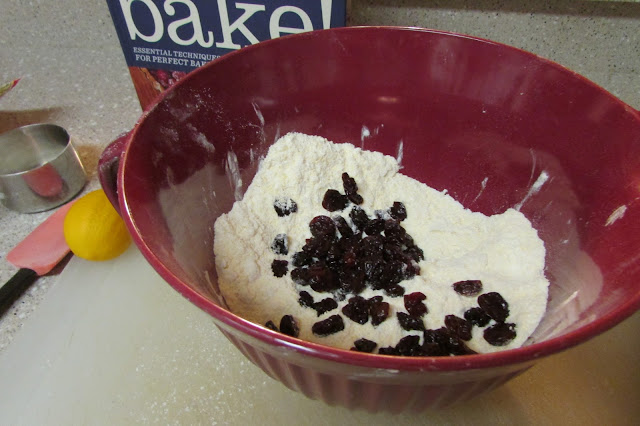 Very easy recipe, went together quickly and no need for any special tools, just your hands, a fork and a mixing spoon! 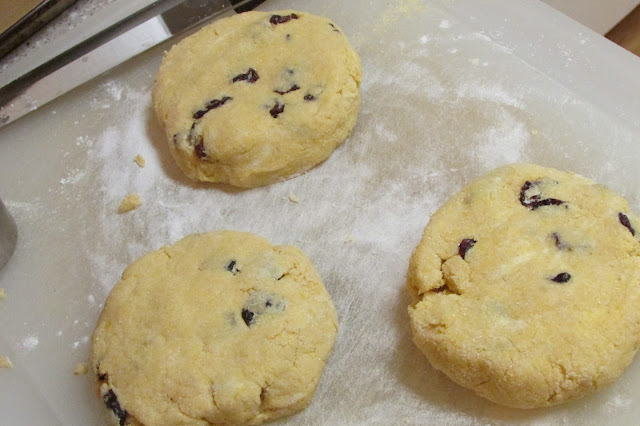 The cornmeal may sound a little strange but it is really good, adds a little texture that is different from a regular scone.  Not a very sweet scone, so I added a little glaze of lemon juice, zest and powdered sugar.  It is not in the original recipe but I like the added lemon flavor and the little flecks of zest on top of the scones. 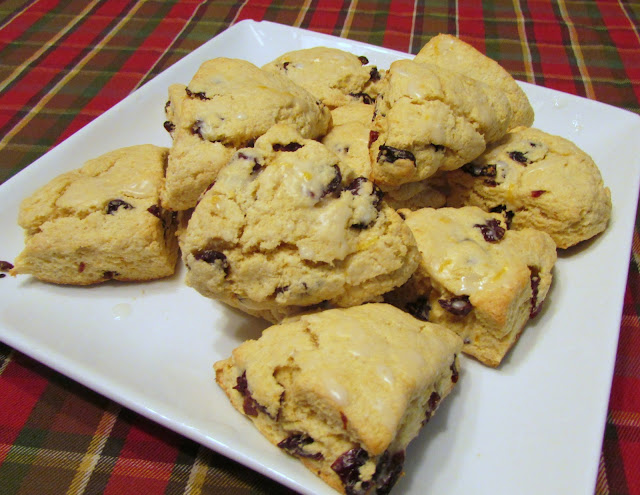 These are perfect for breakfast, tea time, or brunch!  Pop open the champagne, make some mimosas and ENJOY!!!

Preheat oven to 450 degrees and set a rack in the middle level.

Combine flour, cornmeal, sugar, baking powder and salt in a bowl.
Cut butter into 12 pieces and rub evenly into dry ingredients, until mixture has the appearance of fine cornmeal. Add cherries.

Whisk egg, milk, zest and vanilla together and stir into flour and butter mixture with a fork, to form a smooth dough.

Divide the dough into 3 pieces and form each piece into a 5-inch disk. Using a sharp, floured knife, divide each disk into four wedges. Place on pan, leaving 2 inches between scones on all sides.

Bake scones at 450 degrees until they are firm, but not dry, about 10 to 15 minutes. Watch closely to be sure they do not color too deeply.