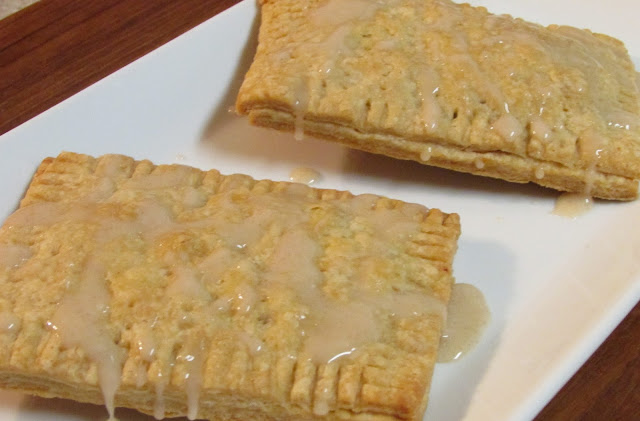 Remember when I made homemade S'mores pop tarts?  I may have mentioned that I don't like them from the box.  I may have also mentioned that I'm insane and a push-over and I make almost anything my kids ask me to make.  Proof I am a push-over...these brown sugar cinnamon pop tarts.  Proof I am insane...made these the same day as my Angelic Brownies and Pizza Spaghetti.  The boys both got it into their heads that they should start looking for recipes on the internet for me to make and then they both begged...and offered to help cook...and offered to help clean up....and basically....I'm a pushover....so.....I said yes. 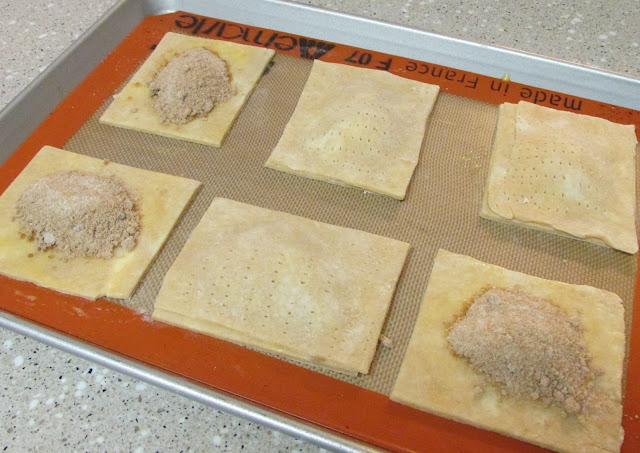 I did get some help with the pizza spaghetti, the pepperoni didn't make it on that casserole itself....and those oreos....they didn't climb into my angelic brownies on their own.  Yes, the kids did help that much....then they disappeared.  No where to be found....until it was time to eat.  Then they were both there and very excited about what "they" had created for dinner. Still...totally worth all of the work, they were so proud to have me make AND blog their recipes! 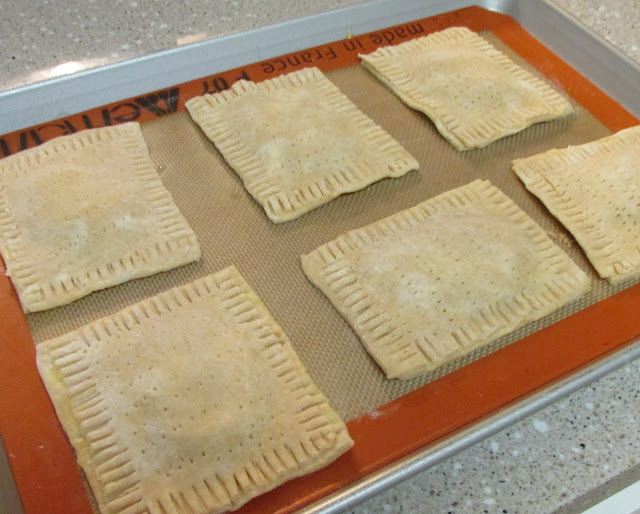 This one I did all by myself.  Kind of involved and a lot of steps to get the dough ready, but totally worth it!  They were gone before they even finished cooling (thus the lack of many photos) and I even got to eat one.  No pop tart has ever tasted so good!  Seriously, I liked them even more than my s'mores pop tarts (and those were super yummy). 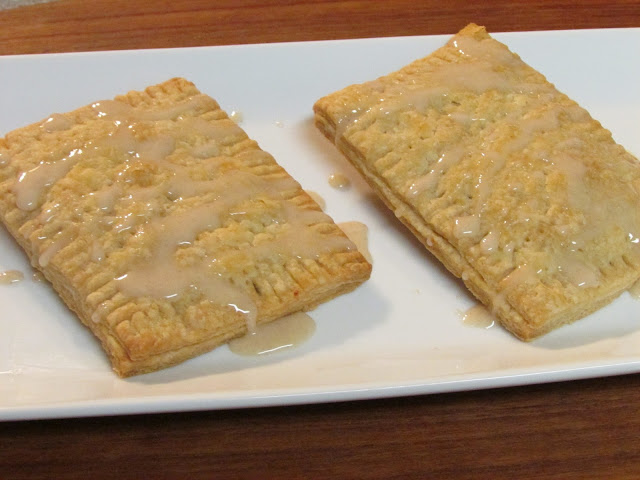 Combine the ingredients for the filling and set aside.

Make the dough: Whisk the flour, sugar, cinnamon, and salt in a large bowl until combined. Add the butter and toss with your fingers until well coated in the flour mixture. Using a pastry blender or your fingers, cut the butter into the dry ingredients until reduced to pea-size pieces.  Whisk the egg yolks and milk in a small bowl until combined and add to the flour mixture, mixing with your hands until large clumps form.

Turn the mixture out onto a work surface and knead briefly, smearing the butter into the dough with the heel of your palm until the dough completely comes together, about 1 minute.

Divide the dough into 2 equal portions and shape into 2 (6-by-5-inch) rectangles. Wrap each tightly in plastic wrap and refrigerate for at least 1 hour.

Heat the oven to 375°F. Line a baking sheet with parchment paper; set aside.

Lightly dust a work surface with flour and roll 1 dough portion out into a rough 12-by-10-inch rectangle, rotating the dough and re-flouring the surface and rolling pin often to prevent the dough from sticking.

Using a pizza cutter or sharp knife, trim the dough to a 10-1/2-by-9-inch rectangle.

Using a flat spatula, transfer the rectangles to the prepared baking sheet, leaving about 2 inches of space between each.

Roll out the second dough portion to the same dimensions as the first, trim, and cut into 6 rectangles. Using a fork, prick the dough all over.

Bake until golden brown, about 23 to 25 minutes. Transfer to a wire rack and let cool completely before glazing.

For the glaze:
Place all the ingredients in a small bowl and whisk until evenly combined. (You may need to add more milk by the 1/2 teaspoon if the glaze is too thick.)
Set the wire rack with the tarts on it over a baking sheet. Using a spoon, drizzle about 1 tablespoon of the glaze over each tart. Let set before eating, about 15 minutes. 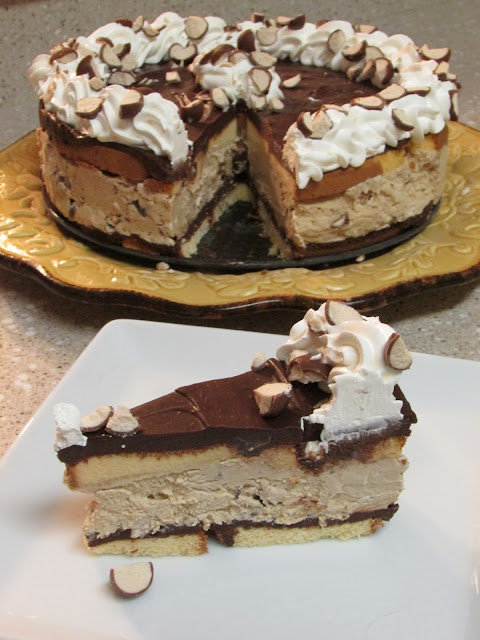 Been crazy busy with work and school and homework lately and I haven't posted in ages!!  So, here is a post...short but sweet!  My oldest son found this recipe and decided we had to make it for Valentine's Day for dessert.  It goes together easily (but takes a while with all of the freezing necessary) and is delicious! 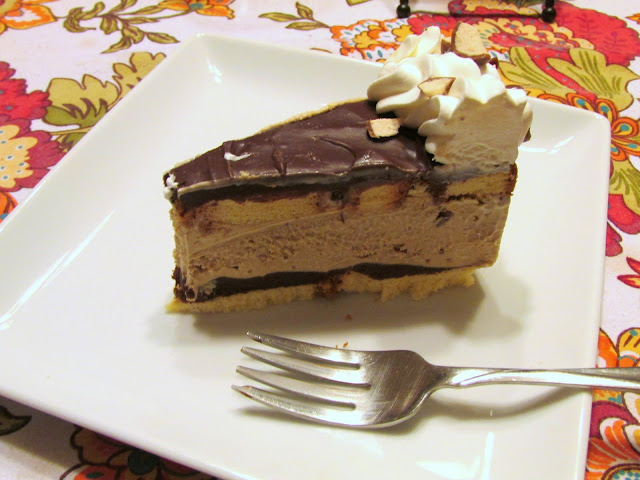 SLICE pound cake into 1/8- to 1/4-inch slices. Place half of the slices on bottom of 9-inch springform pan; press down firmly. Set remaining slices aside.

BRING cream just to a boil in medium saucepan. Remove from heat. Add chocolate; let stand 5 minutes. Whisk until well combined and smooth. Pour half of the chocolate mixture over pound cake in pan, spreading evenly to within 1/4-inch of edge of pan. Cover; freeze for 1 1/2 hours or until chocolate is set. 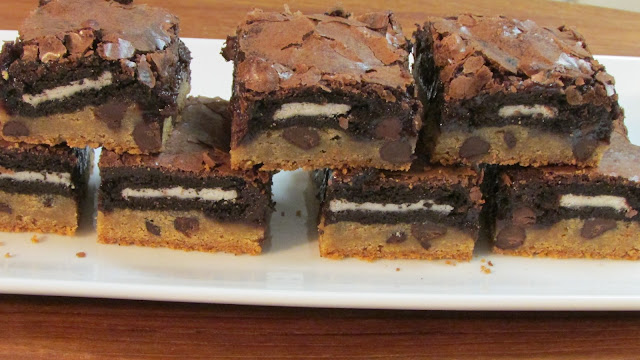 It's celebration time!  Someone got an excellent report card this last quarter and showed great improvement! He worked hard to bring those grades up and we needed to celebrate his success!!!  When asked what he would like for a celebration dinner, he chose Pizza Spaghetti (recipe on the blog), and even searched the web for a recipe.  As for dessert, I thought we should try something new.  All over Pinterest these days I've seen these "Slutty Brownies" and I've been dying to try them!  So I tell both of my boys about them and they cringe at the name, both telling me it is too inappropriate.  Thus, the start of their campaign to rename these sinful brownies and Zack comes up with...... "Angelic".  He said it is ironic.  Did I mention how sarcastic my kids are? 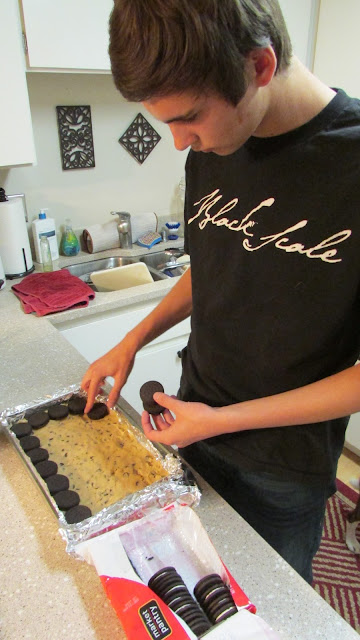 This is the simplest dessert known to man!  Use a 9 x 13 or 9 x 9 inch dish, line with foil and spray with non stick spray.  The bottom layer is chocolate chip cookie dough (Max made my special recipe found here). 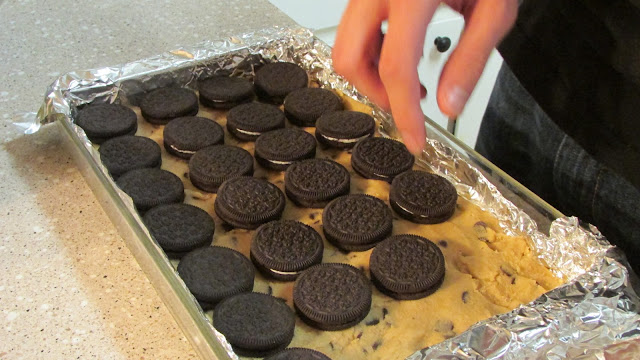 Next is a layer of oreo cookies (placed in perfect rows by Zack).  Next time I really want to try reeses cups instead of oreos (not a big fan of oreos myself), I think it would be to-die-for!!!! 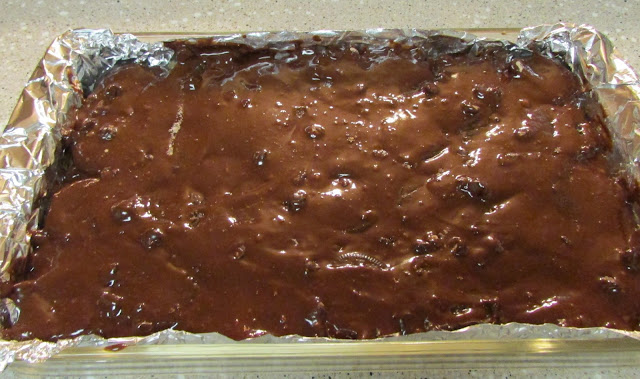 Top it all off with a batch of brownie mix.  Can use boxed brownies or your favorite recipe.  We got lazy and used brownie mix and now I know, for a 9 x 13, you need two mixes if you want a thick brownie layer....which I do....I really really do want the thick gooey brownie layer! 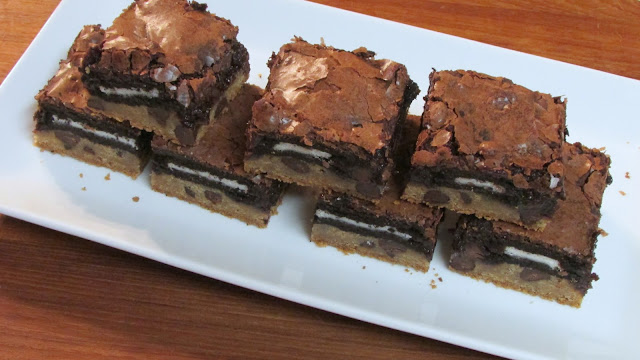 Bake them until done, but still ooey gooey goodness!  Voila....Slutty....I mean Angelic Brownies!  Who am I kidding?  These brownies are waaaaay to sinful to be Angelic!  ;)

Line with foil and spray with non-stick spray: a 9 x 9 inch baking dish (can use 9 x 13 if you double up on everything)

Second Layer: Oreo Cookies (or Reese's Peanut Butter Cups if you are brave)

Third and Top Layer: Brownie Mix or your favorite Brownie Recipe (double if you are using 9 x 13 dish)

Bake in 350 degree oven until toothpick inserted into center comes out clean or almost clean (if you like your brownies on the gooey side) about 30-40 minutes.

Let cool on a rack for about an hour before you lift out of pan and cut into squares.  If you want to enjoy them while still hot then just cut them right in the dish and serve them with a scoop of vanilla ice cream!

Email ThisBlogThis!Share to TwitterShare to FacebookShare to Pinterest
Labels: Brownies and Bars, Desserts 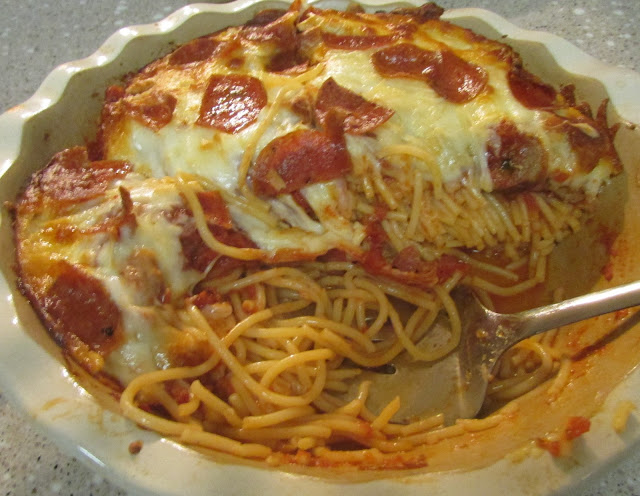 Shortest....post....ever!  This one is for Zack!  To celebrate his great report card, I offered to make a special meal of his choosing.  Zack saw a picture of Pizza Spaghetti on Twitter and went searching the web looking for a recipe.  This super easy recipe popped up on myrecipes.com and was originally from Southern Living. 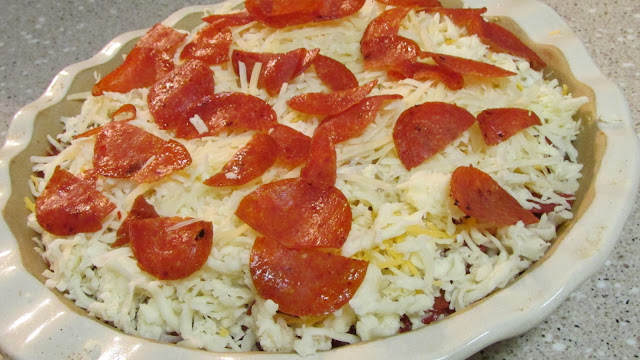 Very cute and fun dish to make with the kids! My youngest, who hates spaghetti, ate two helpings and declared that spaghetti with pepperoni was just awesome!!

Cook spaghetti with 1/2 tsp. salt according to package directions. Drain well, and place in a lightly greased 13- x 9-inch baking dish (can also 1/2 the recipe and cook in a round 9" baking dish). 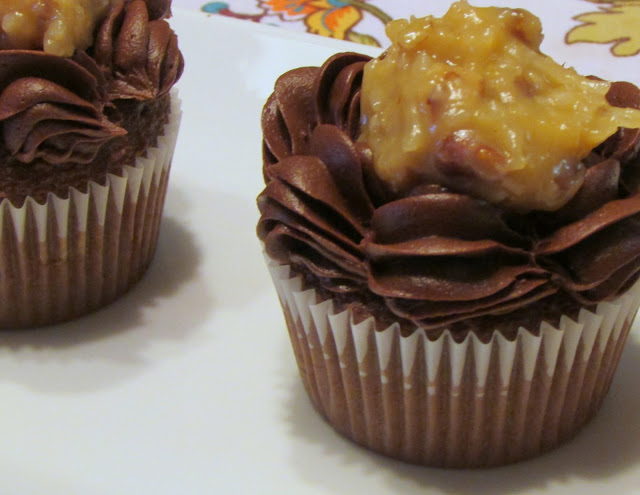 I don't know why it has taken me so long to make German Chocolate Cupcakes.  German Chocolate cake is my families all time favorite cake.  It is the cake my Mom and siblings request for all of their birthdays.  My Mom has been making it from the recipe that has been printed on the back of the Baker's box for all of my life and I have never tasted a recipe for this cake that is better. 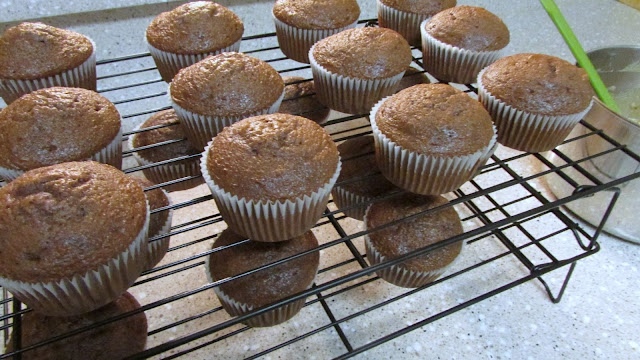 Believe it or not, I've only made the cake once before.  Why would I make it when no one makes it as good as Mom does?  It's true, you can follow that woman's recipes but nothing you make will ever taste as good as she makes it! 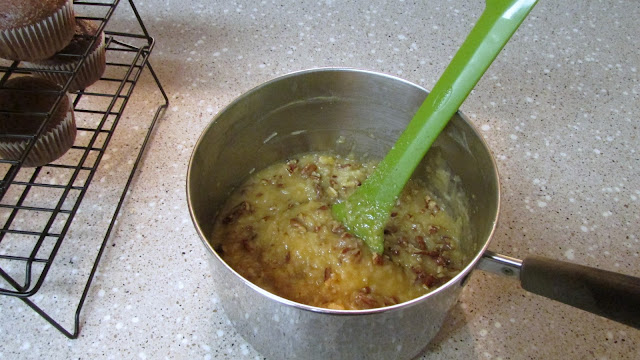 The cake is incredibly tender from the buttermilk and not too sweet.  But my favorite part is the coconut-pecan frosting.  O M G....so good I can eat it from the pan, with a spoon, no cake necessary!   The trick to the frosting is to let it sit and thicken.  You can even refrigerate it for a little bit to speed up the process.  It takes a while but it's totally worth it! 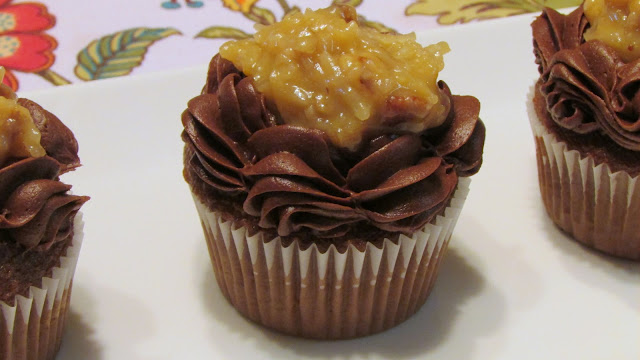 So, this is the first time I've made or even had a German Chocolate Cupcake.....I just really wanted to make them into a cupcake since that seems to be my specialty.  When I googled pictures I saw these beautiful cupcakes with frosting piped around the outer edges, holding in all of that yummy coconut frosting.  They were made by "Your Cup of Cake".  I used my own recipe from my Mom for the cake and coconut frosting and followed the Cup of Cake's lead with the chocolate frosting and design.  So pretty and sooooo delish!!! 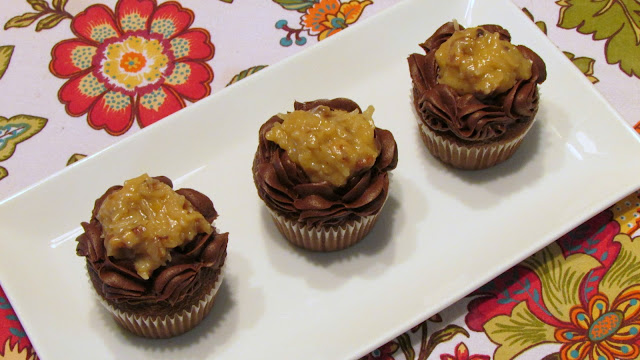 Melt chocolate in boiling water, cool.  Cream butter and sugar until fluffy.  Add yolks, 1 at a time, beating well after each.  Blend in vanilla and chocolate.  Sift flour with soda and salt; add alternatively with buttermilk to chocolate mixture, beating after each addition until smooth.  Fold in beaten egg whites.  Pour into paper lined cupcake pans, filling 2/3 full (alternatively for cake, pour into three 9-inch layer pans).  Bake until toothpick inserted in center of cupcake comes out clean, approximately 16 minutes.  Take out of oven and cool on rack.