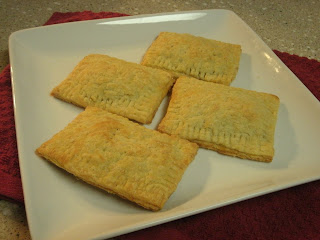 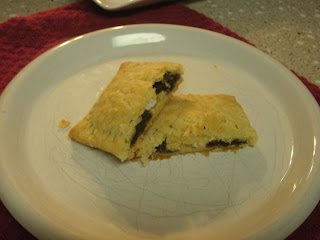 I don't remember eating pop tarts as a child.  Mom didn't like junk food for breakfast or sugar cereals (except for Captain Crunch on Christmas).  My first memory of eating one is as an adult and I remember they had the texture of cardboard and were way too sweet.  My children do not have such discriminating tastes, they love them and beg for them all the time.  Every once in a while I will buy a box as a special treat but for the most part pop tarts do not enter my kitchen.  (Ironically, my Mother sneaks them to the kids when I am not looking)

While I don't like to buy the sugary stuff I will make almost anything requested of me.  Knowing this, my youngest put in his order for homemade pop tarts.  The boys discussed it and agreed that they wanted s'mores flavor, of course, why make it easy on Mom and choose strawberry. 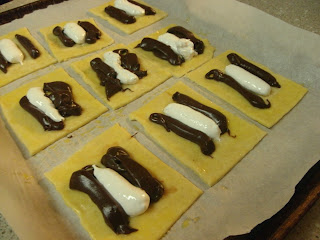 I used the pastry recipe on the King Arthur Flour website, I read reviews and everyone agrees this is the best.  For the filling I used my recipe for chocolate fudge that is spread on my Chocolate Revel Bars and a jar of marshmallow fluff.  The fudge recipe makes enough for two batches of pop tarts or you could save the leftovers for another use (or eat it out of the pan with a spoon, not that I would ever do that)! 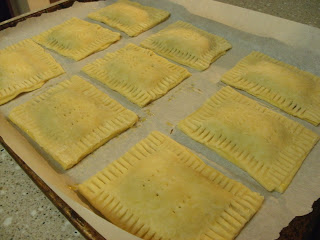 Tips, tips, tips.....I think they were fabulous and flaky and gooey when right out of the oven.  I can only assume that the boys thought so too because all 9 pop tarts were gone in a day!  I think the only thing I would do differently is to add a drizzle of chocolate on the top of the pop tarts just to make them look a little fancier.   The boys wouldn't change anything except to have me double the recipe next time!


Whisk together the flour, sugar, and salt. Work in the butter until the mixture holds together when you squeeze it, with pecan-sized lumps of butter still visible. Mix the egg and milk, and add it to the dough, mixing just until everything is cohesive.

Divide the dough in half; each half will weigh about 10 ounces (about 280g). Shape each half into a rough 3" x 5" rectangle, smoothing the edges. Roll out immediately; or wrap in plastic, and refrigerate for up to 2 days.

In a medium saucepan combine the butter, the sweetened condensed milk, and the chocolate pieces.  Cook over low heat until chocolate melts, stirring occasionally.  Remove from heat.  Stir in 2 teaspoons vanilla.

If the dough has been chilled, remove it from the refrigerator and allow it to soften and become workable, about 15 to 30 minutes. Place one piece on a lightly floured work surface, and roll it into a rectangle about 1/8" thick, large enough that you can trim it to an even 9" x 12".  Cut the dough into nine 3" x 4 " rectangles.

Roll the second piece of dough just as you did the first and again cut nine 3" x 4" rectangles.

Beat the egg, and brush it over the entire surface of the dough. Pipe or spread the fudge filling onto each of the nine rectangles leaving a 1/2" border, I piped two lines of fudge leaving space between them for the marshmallow.  Pipe or spread a row of the marshmallow fluff between the fudge on each rectangle.  Place the second sheet of dough atop the first, using your fingertips to press firmly around each pocket of jam, sealing the dough well on all sides. Press the tines of a fork all around the edge of the rectangles.

Gently place the tarts on a lightly greased or parchment-lined baking sheet. Prick the top of each tart multiple times with a fork; you want to make sure steam can escape, or the tarts will become billowy pillows rather than flat toaster pastries. Refrigerate the tarts (they don’t need to be covered) for 30 minutes, while you preheat your oven to 350°F.

Bake the tarts for about 25 minutes or until golden brown.  Remove from oven and allow to cool.