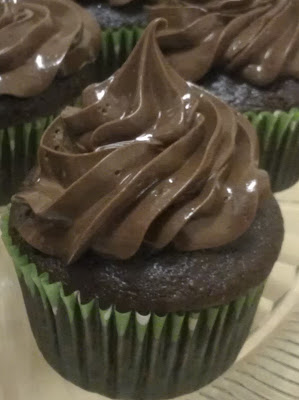 Apparently cupcake challenges were the big thing in 2009 and people were making a lot of Martha Stewart recipes from her fabulous book "Martha Stewart's Cupcakes".  I missed the boat on that one but I'm definitely in a cupcake mood this year!  I have never been a big fan of the cupcake but now that I see all of the wonderful things you can do with them, I am hooked!  They are so much fun to fill and glaze and add different ingredients to....gone are the days of box cakes and tubs of frosting!
When I was asked to make a special dessert for a birthday I thought to myself "what would Martha bake?"  I'm pretty sure she would be pleased with my selection.  I chose to make her Chocolate Salted Caramel Cupcakes which sound more intimidating than they really are.  The cupcakes themselves were very simple. I actually made them the day before I needed them and they stayed super moist. 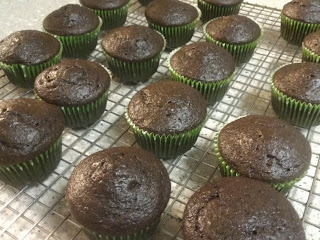 I'm not going to lie to you.....the caramel filling was a bit challenging.  On the first batch (yes, it took me two tries) I waited and waited for the candy thermometer to rise to 360 and when it was at 325 I turned away from the stove to take pictures of the cupcakes.  BIG mistake!  Burned the first batch.  The second batch I cooked over medium-high, as opposed to Martha's suggested high heat, and I never turned away for a second.  The caramel turned out perfect!  My advice to you is to just be patient and stay near by and focused on the caramel and it will be fine! 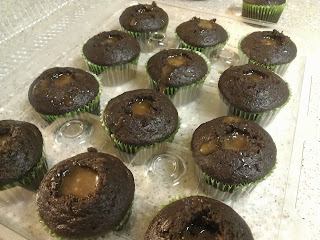 I used a cool little gadget meant for hollowing a cupcake but you could use a small paring knife to cut away a little of the center for the filling.  I actually poured my filling in but you can spoon it in if that is easier for you. 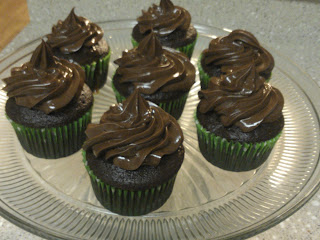 Second warning.....there is about 50000000 pounds of butter in this frosting!  OK, that's an exaggeration. But it is pretty close.  There is a lot of butter and a lot of chocolate and totally worth every extra calorie!  The frosting may be the best part of this dessert.  It was rich and chocolaty and, as you can see from the photo, so glossy and beautiful!  The cupcakes were meant to be sprinkled with fleur de sel but I decorated mine with dark chocolate decorations as they were for a birthday party and I wanted them to be festive.  Please do use the fleur de sel though, the salt goes perfectly with the sweetness of the caramel!

Spoon the batter into liners about two-thirds full. Bake approximately 15 minutes, or until tester comes out clean. Transfer tins to wire racks and allow to cool for 10 minutes; turn cupcakes onto racks and let cool completely. Cupcakes can be stored overnight at room temperature, or frozen up to 1 month in air tight containers.

To finish, use a paring knife to cut a cone-shaped piece (about 1/2 inch deep) from the center of each cupcake and throw away the pieces. Spoon 1 to 2 teaspoons warm Salted Caramel Filling into each hollowed-out cupcake. You will notice the caramel will sink into the cupcake a little, just fill it up a bit more. Sprinkle a pinch of sea salt over filling.

Use a pastry bag with a medium open-star tip and pipe Dark Chocolate Frosting onto each cupcake, swirling tip and releasing as you pull up to form a peak. Garnish each cupcake with a pinch of sea salt. Cupcakes are best eaten the day they are filled and frosted. Store at room temperature in airtight containers - do NOT refrigerate. Enjoy!

Directions
Heat sugar with the water and corn syrup in a heavy saucepan over medium-high, stirring occasionally, until syrup is clear; clip a candy thermometer to side of pan and stop stirring.

Cook until syrup comes to a boil, washing down sides of pan with a wet pastry brush as needed. Boil, gently swirling pan occasionally, until mixture is caramelized and just reaches 360°F. Remove rom heat and slowly pour in cream; stir with a wooden spoon until smooth. Stir in sea salt.

Use immediately; if caramel begins to harden reheat gently until pourable.

Combine cocoa and boiling water, stirring until cocoa has dissolved.

With electric mixer on medium-high, beat butter, confectioners' sugar, and salt until pale and fluffy. Reduce speed to low. Add melted and cooled chocolate, beating until combined and scraping down sides of bowl as needed. Beat in the cocoa mixture.