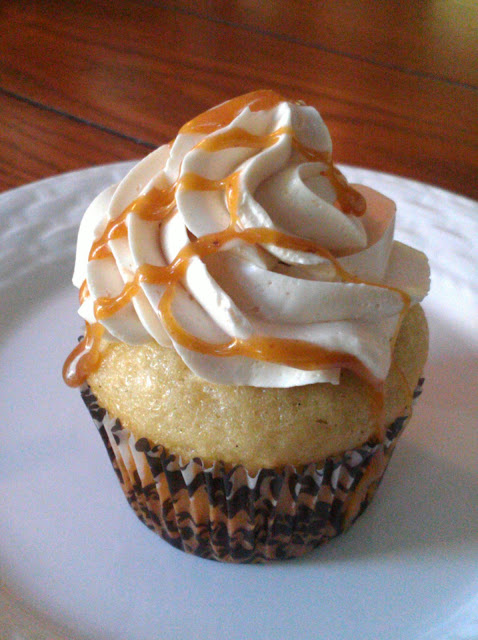 I KNOW....this post is long overdue!  My birthday was actually one month ago today and I have been promising to post this recipe ever since.  This Vanilla Bean Cupcake with Caramel Filling and Caramel Swiss Meringue Buttercream (Yes, I know....long name) is my newest, most favorite of all time, CUPCAKE! It was also the signature dessert for my Birthday!  I am not much of a cake eater and (believe it or not) I am not much of a chocolate dessert eater.  I LOVE chocolate but caramel is really where it's at for me!

I have long been on the search for the perfect vanilla cupcake recipe.  I have tried countless recipes that end up way too dense and dry or too moist and crumbly.  Recently I came across a blog called Cupcake Project written by a brilliant woman named Stef, who basically does all of the hard work for you.  She tries all sorts of recipes and has others do the same and rate them.  After a lot of work she came up with the ultimate vanilla cupcake recipe which I used as the base for my cupcake.  It is light and fluffy but strong enough to hold up to any filling or frosting.  It is flavorful but not too sweet.  Best of all, it uses actual vanilla bean and has those beautiful flecks of beans that make this cupcake stand out and look so beautiful! You can actually see them in the photo below!  :) 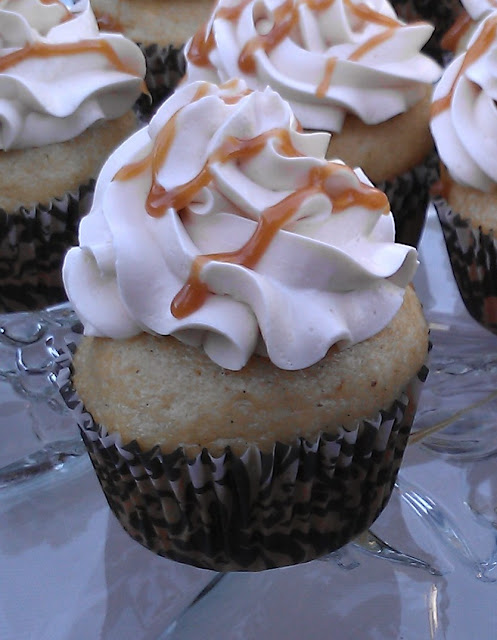 The filling......(sigh)....the filling was....let's say the filling was challenging.  I LOVE caramel.  No, I mean I REALLY LOVE caramel.  Like "eat it out of the jar when no one is looking" kind of love for caramel.  The problem with caramel is that it is hard for me to make.  Yes, I have made it before with no problems but I think that may have been beginners luck because I have also burned the caramel on many occasions.  There is that small window of time between under-cooked and burnt.  So I started with one caramel recipe and I was so overly cautious that I under cooked it.  The color was too light and the flavor was bland and it was too runny.  Second time around, the sugar crystallized around the sides of the pan and left little bits of crystallized sugar in my caramel.  I went back to the drawing board and came across a recipe for thick caramel sauce and filling on Cakecentral.com.  The recipe looked different than any I had seen before.  First of all, it used brown sugar.  Second of all, there was sweetened condensed milk in it.  SUPER easy!  I didn't even use the candy thermometer and it turned out perfect.  So perfect that I got a stomach ache from eating too much of it.  This stuff is perfect for drizzling, filling, spreading or even eating it over ice cream.  Heck, I caught my sister practically licking the leftovers out of the measuring cup I was using! 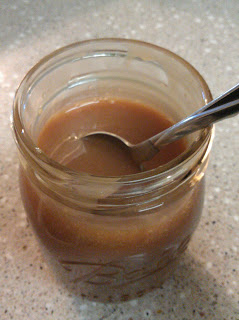 The picture does not do it justice!  You will just have to make it and see for yourself....best caramel recipe EVER!

To frost the cake I used my favorite Swiss Meringue Buttercream that you have seen me use in many of my recipes.  We have Martha to thank for that one....there is no better frosting!  I added 1/3 cup of my homemade caramel sauce to the frosting (same as I did for the Toffee Crunch Cupcakes).  After piping on that delicious frosting, I made it "over the top" fabulous by drizzling a little more of my caramel over the frosting! 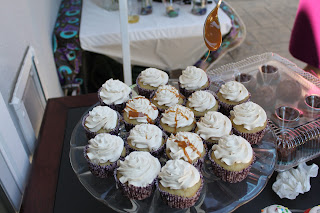 I realize that there are a lot of steps and that it looks like a lot of work, but it's worth it!  These cupcakes were gone in minutes, so fast that I didn't even get one on my Birthday.  I had to make them again the next day so that I could try one! 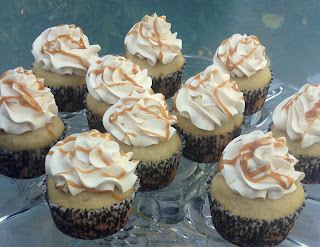 Make these.  Make them soon.  But when you do, make sure you eat one before you show them to your family and friends.  If not, you may not get one before they gobble them all up!  :)

This recipe featured on:
Chocolate, Chocolate and More - Thursday's Treasures
Foodie Friends Friday
My Turn For Us - Linky Party

The Cupcake:  (recipe from cupcakeproject.com)
Yield: 16 cupcakes (I doubled it to get 32)

Preheat oven to 350 F (175 C).
In a small bowl, combine sugar and seeds from the vanilla bean.  Using the back of a spoon, move around the bowl and apply pressure to break up any clumps of seeds and to better infuse the vanilla flavor into the sugar. Set aside.

In a medium-sized mixing bowl or bowl of a stand mixer, mix together cake flour, baking powder, baking soda, and salt.  Add the vanilla bean sugar and mix until well combined.  Add butter and mix on medium-low speed for three minutes.  Because there is so little butter, you'll end up with a very fine crumb texture.

When the cupcakes are done, remove them immediately from the pans and cool on a rack.

The Caramel: (recipe from cakecentral.com)
Yield: about 4 cups

In a heavy saucepan, bring butter, brown sugar, corn syrup and sweetened condensed milk to a boil over medium heat, stirring. Carefully stir in whipping cream. Attach a candy thermometer to your pan. Continue to stir until the caramel reaches 238 degrees, or the soft ball stage. Remove from heat and add vanilla and salt.

The Frosting: (recipe from marthastewart.com)

Combine egg whites and sugar in a bowl placed over simmering water. Bring mixture to 150 degrees F while whisking constantly.

Transfer mixture to stand mixer bowl, fitted with a whisk attachment and beat on medium speed until mixture cools and doubles in volume.

Add butter in one piece at a time, mixing to incorporate after each addition. The mixture may appear clumpy and almost curdled looking-this is normal. Keep mixing and it will become even and smooth again. Add salt and vanilla and mix to combine. Add caramel sauce and mix to combine.

Use a paring knife to cut a cone-shaped piece (about 1/2 inch deep) from the center of each cupcake and throw away the pieces. Spoon caramel filling into the cupcake.  Frost with buttercream and drizzle with more of the caramel sauce!!