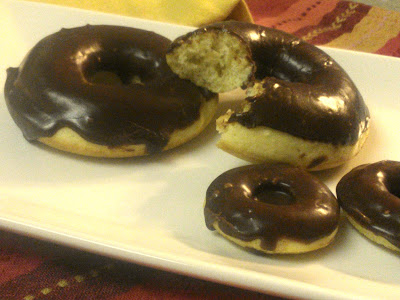 Summer break is here, school is out, teenagers are running wildly through my house, shooting dart guns, hiding each other's things and holding them ransom, making messes and eating every scrap of food in sight!  There are always stray kids spending the night and they all stay up super late, watching inappropriate TV and making tons of noise!  Basically, I haven't laughed this much in years and I am sleep deprived!

When you have sleepovers at your house there are certain expectations....pizza for dinner, soda, dessert and donuts for breakfast!  Since I am not made of money and I cannot seem to get my money tree to grow in the garden, I am forced to improvise!  Last night was homemade pizza (see my post from January called "Sleepovers and Homemade Pizza") which is much healthier, super easy, and INEXPENSIVE!!!  For breakfast I decided it was time to pull out the Wilton donut pans and try baked donuts!

I got the pans as a gift a while back and there they sat....in the box....in the garage.  I thought the idea of baking homemade donuts was nuts.  Too much work, too much time and there was no way they would be good.  WRONG!!!

I can't believe how easy they were to make!  Took 10 minutes to put the batter together and 8 minutes to bake them and dip them in a chocolate glaze.  It actually took the kids longer to eat them all than it took me to make them!

Everywhere I look lately I see people blogging about their baked cake donuts.  I figured it was about time I see what the fuss is all about.  I searched around and found that most people were using an adapted version of the recipe Wilton includes with the donut pans.  I particularly liked the sound of the recipe on Cook Au Vin, as she stated that her recipe was lighter and fluffier and less dense than most other recipes. 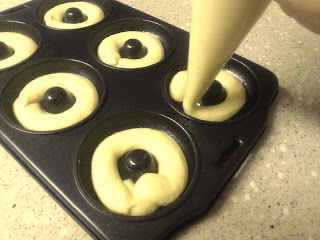 I followed her recipe pretty much exact except that I doubled it and excluded the cocoa, making mine a vanilla donut (as was requested by the boys).  I did not use her glaze but chose a recipe that Alton Brown used on his show when he made donuts.  The glaze reminds me of the chocolate glaze on the raised donuts at a shop here in town!  YUMM! 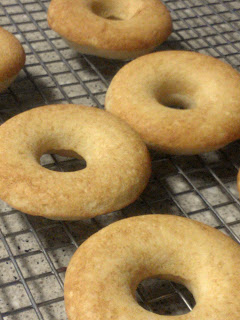 I hope you all try them!  Don't be afraid!  Just get your donut pans out of the garage (or head to the store to buy some) and start baking!  Next time I'm making Chocolate with Chocolate glaze and toffee bits!!!

Into a medium bowl, sift the flour, sugar, baking powder and salt.  Add the buttermilk and egg and combine.   Stir in the butter.   In a small bowl, combine the baking soda and vinegar, then add vanilla.  Add this mixture to the donut batter and combine.

Put the batter into a ziplock bag and snip a hole on the end.  Squeeze the dough into the donut pans, only filling each about half way.  They will rise considerably while baking and the hole will close up if you fill them too much.   Bake for 8 minutes.  Allow to cool for a few minutes before moving them to a cooling rack.   Wipe the pan out, spray with cooking spray again, and bake the remainder of the dough.

Combine butter, milk, corn syrup, and vanilla in a medium saucepan and heat over medium heat until butter is melted.  Decrease the heat to low, add the chocolate, and whisk until melted.  Turn off heat, add the confectioners’ sugar, and whisk until smooth.

Dip the cooled donuts into the glaze and place back on the rack to set.