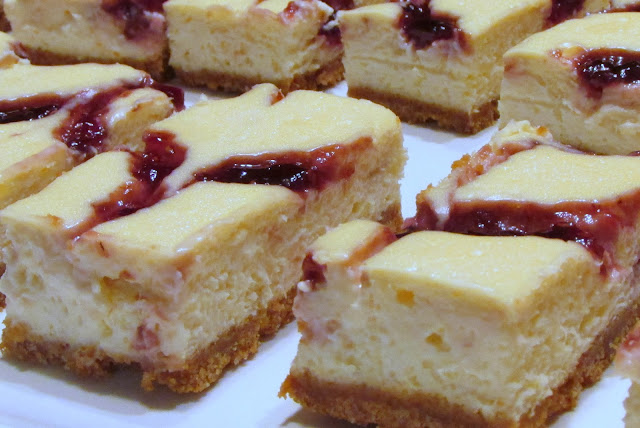 There are not a lot of pictures of these beautiful cheesecake bars.  Not because they aren't beautiful but I was probably crying a little too much to take great pictures.  It turns out that crying makes things look blury and apparently blury pictures aren't super cool.  No, nothing is wrong.  These are happy tears...honest, they are.  No really....I'm not just saying it so that it will become true.

My oldest son is a senior in high school and it is college application time.  Actually, he has already applied early for a few colleges and the rest are going through now.  Six applications in all and only one in California....the rest are on the other side of the country.  Do you know how far away that is??  I don't either but it looks like it's pretty far.

I was super excited when we started this process and super proud that he wanted to apply to all of these awesome schools.  I kept encouraging him and telling him how proud I am of him.  Well.....now those colleges are starting to send letters.  He has already been accepted to two of them.  The first was Drexel University....um yep....the one in Pennsylvania (don't worry, I had to Google it too).....we live in California....that's kind of a long commute.  So anyways.....for all of you parents out there....don't be fooled by those darn college applications.  Yes, they seem all cool and fun and exciting...new adventures, growing up, becoming an independent adult, blah, blah, blah!  But really, they are a devious plan to move your kids halfway across the country and far away from you.

To help cheer myself up, I made these delish Raspberry Cheesecake Bars.  They are very pretty and would be the perfect dessert for a New Years Eve party, they are also super good for drowning your parental sorrows! (Eat two and follow with a glass of red wine)

Use any fruit filling or jam that you like....I am partial to raspberry! 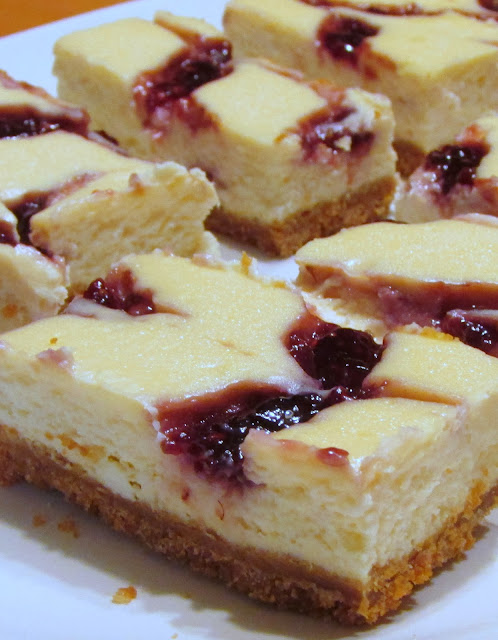 p.s. I really am happy for my son.  He is ready to start off on a new adventure and I couldn't be more proud. Also, teenagers are known to have the occasional attitude that makes you think "huh, halfway across the country might not be so bad".

In an electric mixer beat cream cheese, 1 cup sugar, flour and vanilla with mixer until well blended. Add sour cream; mix well. Add eggs, 1 at a time, mixing on low speed after each just until blended. Pour over crust. Gently drop small spoonfuls of jam over batter; swirl with knife. (I like to pipe the jam onto the batter in parallel lines and then cut through with knife....play around with it to create different patterns)

Bake 40 min. or until center is almost set. Cool completely. Refrigerate 4 hours. Use foil handles to lift cheesecake from pan before cutting to serve.


Recipe Shared On:
Kathe With an E - You're Gonna Love it Tuesday
21st Century Housewife - Hearth and Soul Hop
My Turn For Us - Freedom Fridays
Keep Calm and Cook On - January
Strut Your Stuff Saturday Link Party
What'd You Do This Weekend
Treasure Box Tuesday
Foodie Friends Friday
Posted by Baker Becky

Email ThisBlogThis!Share to TwitterShare to FacebookShare to Pinterest
Labels: Brownies and Bars, Desserts