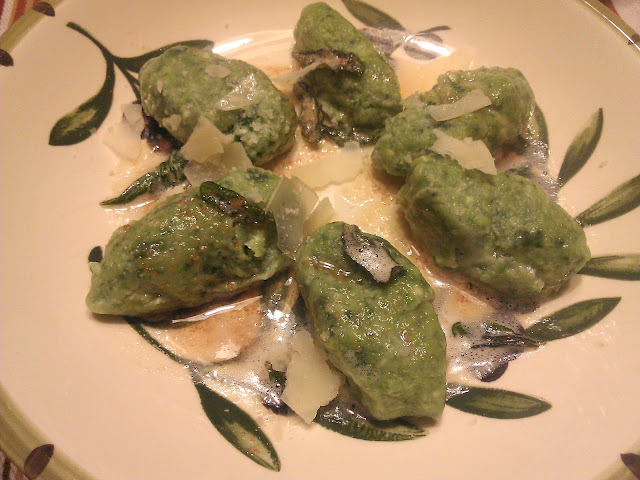 Malfatti, when translated from Italian, means "poorly made".  I have no idea how anyone could call these delicate, light, fluffy and delicious dumplings "poorly made".  They are like little bites of heaven to me!  Malfatti are really a Tuscan version of Gnocchi, that are made with flour, ricotta, and spinach (or kale, swiss chard, etc.). 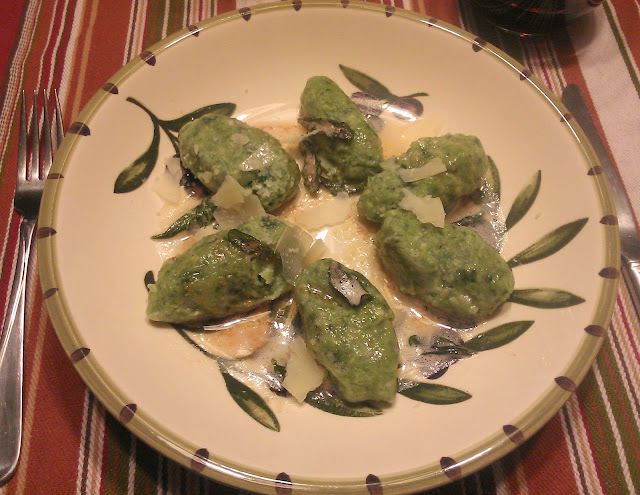 I was recently told about these heavenly dumplings from a friend who had seen the recipe in Saveur Magazine.  I looked them up online and saw that they mixed ricotta cheese with swiss chard and a small amount of flour for what turns into incredibly light pillows of goodness that they serve with a Sage and Browned Butter Sauce.

How could I resist!  I had just been to the farmers market and had close to 2 lbs of kale at home just begging for a new recipe.  Saveur used 4 lbs of swiss chard and the picture of their Malfatti is of an extremely dark dumpling.  I decided to try it with my 2 lbs of kale.  Perfect flavor, the kale was not overpowering but rather light and added a nice green color to the dumpling. 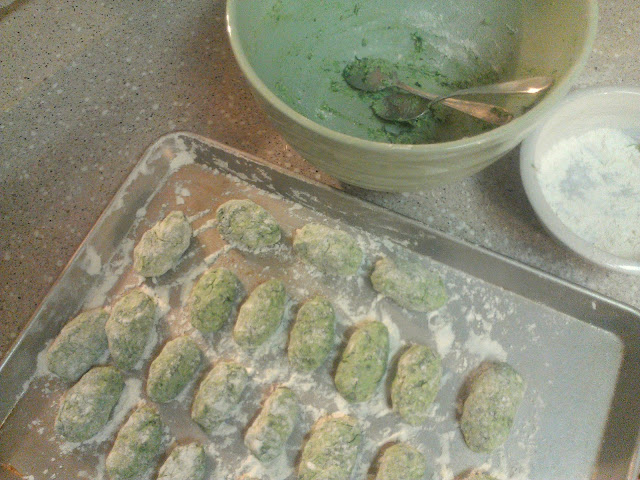 Now, this is a simple recipe and didn't take too long but I will warn you to keep flour on hand to shape your malfatti.  I ended up using two spoons to shape them and dumping the newly formed malfatti onto a plate of flour and rolling the dumpling in that before placing on a cookie sheet.  This kept them from sticking to the cookie sheet or my hands. 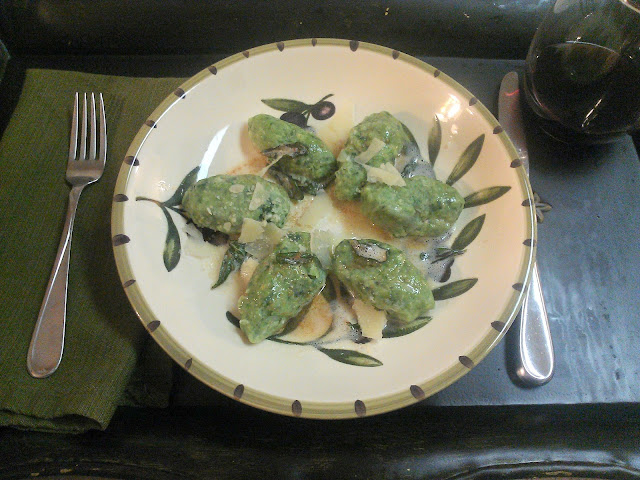 The sauce is simple but delicious.  You could serve these with a marinara sauce as well but I really enjoyed the simple flavors of the browned butter sauce with the crispy sage leaves.  My mouth is drooling just thinking about it!  :)

Put ricotta in a cheesecloth-lined strainer set over a bowl and let drain overnight in refrigerator.

Bring a large pot of salted water to a boil and add kale; cook until soft, 3–4 minutes. Drain kale and let cool. Squeeze kale with your hands to expel liquid and transfer to center of a tea towel, bring up edges, and squeeze to expel remaining liquid.  Transfer kale to a food processor and pulse until finely chopped. Place kale in a large bowl along with drained ricotta, 1 tsp. salt, 8 tbsp. butter, flour, nutmeg, egg yolks, and egg. Season with pepper and mix until smooth. (Test 1 dumpling: Bring a small pot of water to a boil. Measure out 1 tbsp. of mixture, roll in flour, and boil until the dumpling floats. If dumpling falls apart, stir 1/4 cup more flour into mixture.)

Grab a large spoonful of the mixture (1 - 1 1/2 tablespoons of mix) and using two spoons shape portion into an oval and roll in flour on a plate. Transfer dumplings to a lightly floured baking sheet and repeat with remaining portions. (If not cooking immediately, cover and freeze malfatti for up to 6 months.)

Bring a large pot of salted water to a boil and add dumplings; cook until dumplings float, 1–2 minutes. Using a slotted spoon, transfer dumplings to a baking sheet. Meanwhile, heat remaining butter in a 10" skillet over medium-high heat, stirring occasionally, until lightly browned, about 5 minutes. Add sage and cook until leaves are crisp, 1 minute. Divide dumplings between 4-6 serving plates, drizzle with sage butter, and garnish with more Parmesan and nutmeg, if you like.

This recipe shared on:
The 21st Century Housewife - The Hearth and Soul Blog Hop
Foodie Friends Friday
My Turn For Us - Freedom Fridays