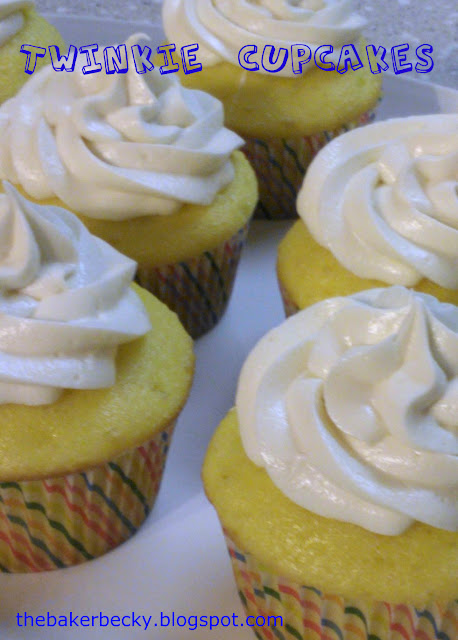 That's right....I did it....I made a cupcake that tastes like a twinkie!  Don't tell me you don't miss twinkies....maybe even just a little bit.  No?  It's just me?  I will admit it, I took the twinkie for granted.  Once a year I would buy that little package of Hostess Twinkies with those two golden twinkie logs.  I would open them up and lick all of that yummy marshmallow filling out and then, eat the empty halves!  Sounds gross?  Nope....it was heavenly.   But only once per year, any more than that and I probably would have gotten sick of them. 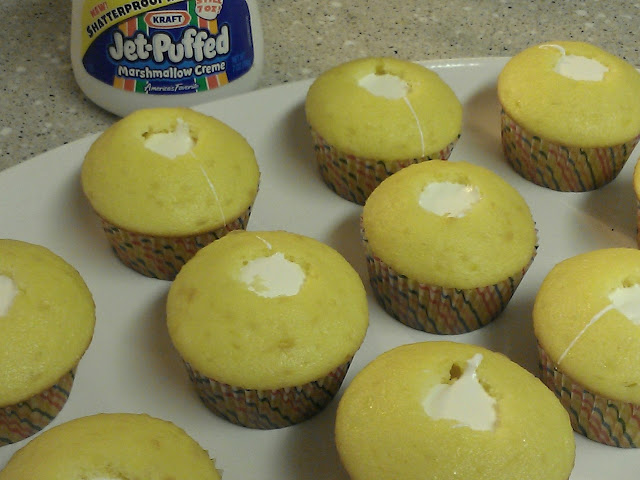 I never even bought that "last" twinkie before the company closed.  I figured it was no big deal.  But over time my mind has started to stray to the twinkie.  I'm kinda wishing I'd had just one last twinkie.

Luckily....these twinkie cupcakes are all over the internet.  The Lady Behind the Curtain makes a pretty convincing twinkie cupcake....it's also really easy to make.  Shhhh....we don't need to tell anyone that we used a box....it can be our little secret!

If you are having a little twinkie craving...try these cupcakes.  Super yummy with that delicious marshmallow filling and the added bonus of a marshmallow buttercream on top!  :) 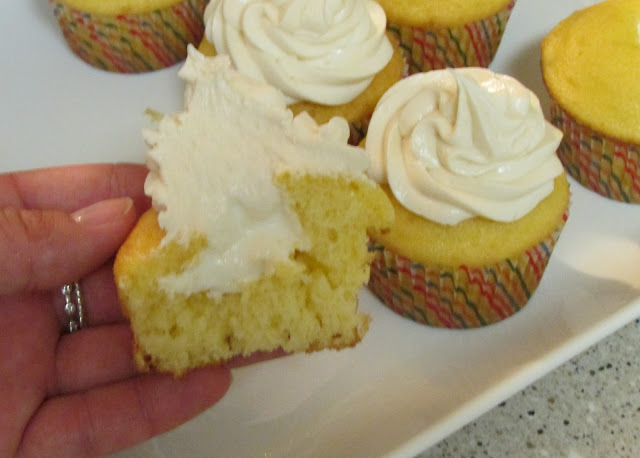 Twinkie Cupcakes adapted from Lady Behind the Curtain

Follow directions on box but add 1 tablespoon of vanilla to the mix.  I usually get 18-20 cupcakes from one box.

Cool completely and use a melon baller or sharp knife to core the center of the cupake.


Beat together the marshmallow cream, butter, confectioners’ sugar and vanilla until fluffy. Mixture should be light but not as stiff as frosting.

Scoop filling into a zip top bag, seal tight, and snip off a corner of the bag.  Pipe the filling into each cupcake.  Filling just to the top.

3 to 4 tablespoons water (if needed)

Beat together the fluff, butter, and vanilla until combined and creamy.  Gradually add confectioners’ sugar.  NOTE:  Frosting may be too thick.  If so add 3 to 4 tablespoons of water to frosting ONLY 1 tablespoon at a time until the frosting reaches piping consistency.  Pipe frosting onto cupcakes, careful to cover the filled center.