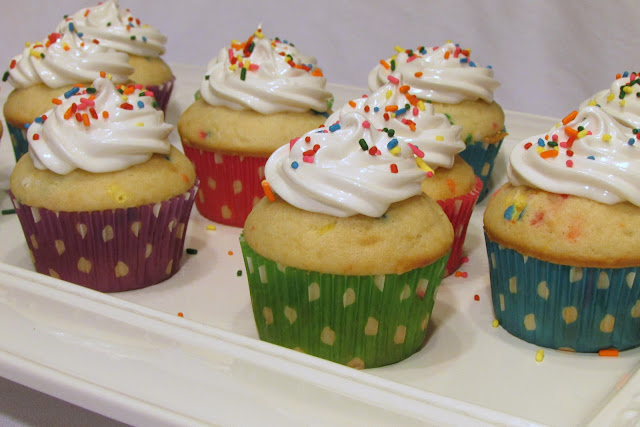 Yes, I know....I disappeared again!  I spent the last three weeks of December baking for clients but had no time to do any photographing or blogging.  Right now I'm working on baking my New Years Eve specials.  For this holiday I offered Snowball Cupcakes (aka my Coconut Cupcakes) and Confetti Cupcakes.  I thought these were perfect desserts to offer for winter time celebrating! 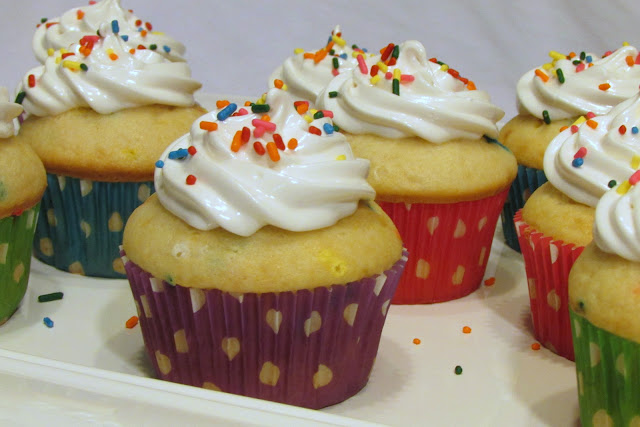 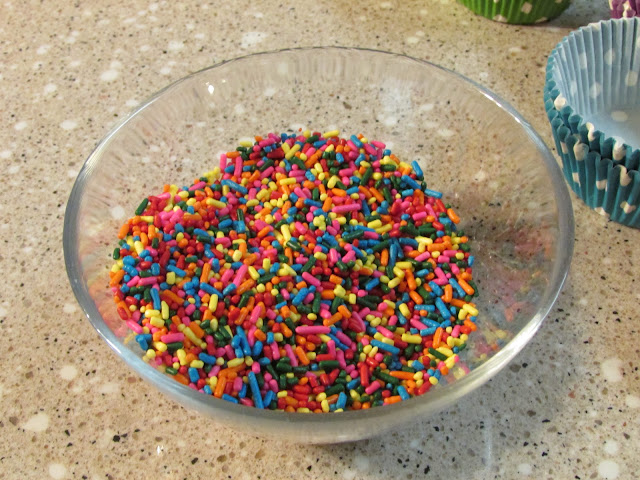 I have never actually had a "Funfetti" cupcake from the box but I have seen people serve them over the years and they look like a celebration cupcake to me.  I thought they would be so much fun to make from scratch and the perfect cupcake to offer for NYE (or a Birthday, for that matter).  I LOVE when people start tossing out the confetti at midnight on New Years.  I love to see the sky littered with colors, raining down over everyone.  That is what I hoped to capture with these cupcakes! 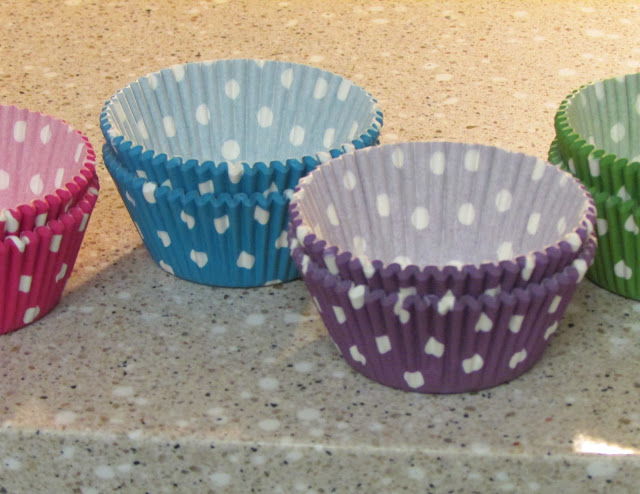 I bought several different colors of jimmies (the best candies to use for these cupcakes because they melt best) and mixed them myself.  I wanted all of the bright, happy colors!  Then I made a vanilla white cupcake batter and mixed them in. 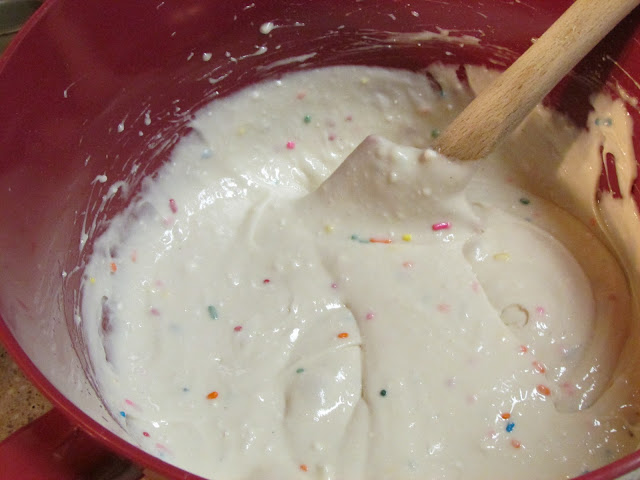 I probably could have added more jimmies to the mix, but I like that there's not too many.  I want to be able to taste all of that yummy vanilla bean and have the colorful jimmies just be there for the added color. 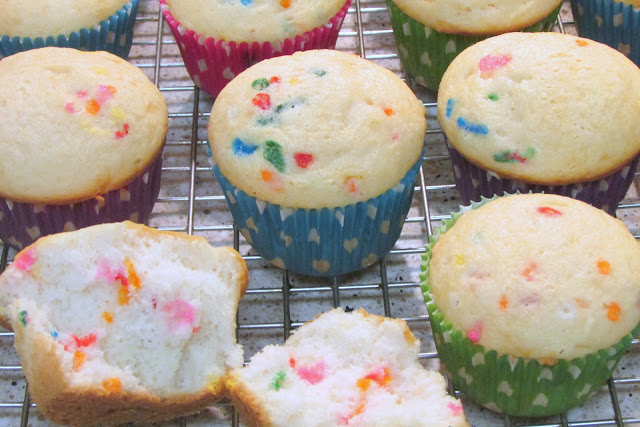 Most of the time people frost their Confetti Cupcakes with a vanilla buttercream but I am in love with my Seven Minute Frosting recipe and I think it is soooooo good on ANY cupcake.  Besides, who doesn't LOVE that marshmallow flavor laced with vanilla?  Plus, it's super light and fluffy and we have had enough heavy, rich foods to last us a few months! 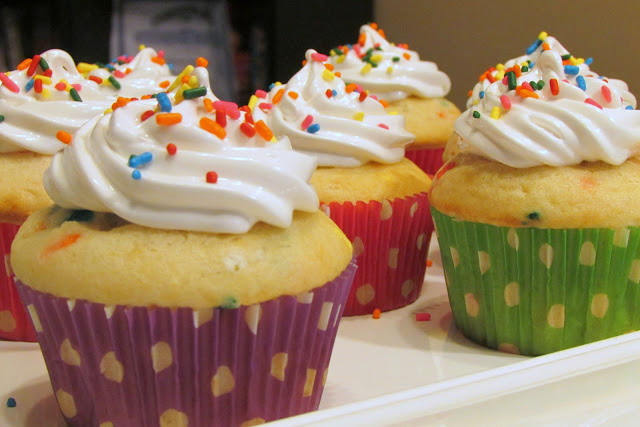 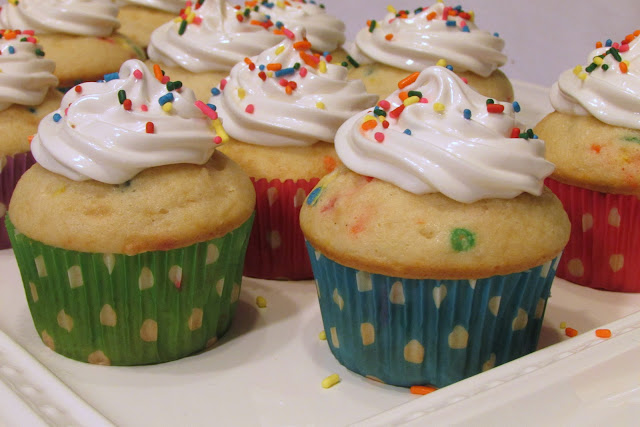 Make these cupcakes, pop the cork on the champagne bottle and let's celebrate!
HAPPY NEW YEAR!!!

In a large bowl, sift flour, baking powder and salt. Set aside. In a mixer, beat the sugar and butter until well combined, about 2-3 minutes. Add egg and egg white, one at a time, beating on low.  Add vanilla. Gradually add flour mixture in 3 additions, alternating with milk in 2 additions, ending with the flour mixture. Fold in 2 tablespoons rainbow sprinkles.

Fill cupcake liners about 2/3 full. Bake for about 15-18 minutes or until a toothpick inserted in the middle comes out clean. Remove from pan and cool completely on a wire cooling rack before frosting.  Pipe or spoon Seven Minute Frosting onto each cupcake and decorate with remaining sprinkles.

Place all ingredients, except vanilla, in top of a double boiler.  Place pan over boiling water, being sure that boiling water does not touch the bottom of the top pan.  Beat constantly on high speed with electric mixer for 7 minutes.  Remove from heat and beat in vanilla.

Email ThisBlogThis!Share to TwitterShare to FacebookShare to Pinterest
Labels: Cupcakes